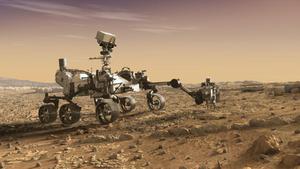 And then there were 155. The competition to name NASA's next Mars rover has entered the home stretch, with the space agency culling the field from 28,000 student entries to 155 semifinalists.
By Mike Wall | January 17, 2020

The competition to name NASA's next Mars rover has entered the home stretch, with the space agency culling the field from 28,000 student entries to 155 semifinalists.

The 2,300-lb. (1,040 kilograms) robot, which currently goes by Mars 2020, is scheduled to launch this July and touch down inside the Red Planet's Jezero Crater in February 2021. Mars 2020 will search for signs of ancient life, characterize the geology of its surroundings, collect and cache samples for eventual return to Earth and test out tech that will aid human exploration of the Red Planet, among other tasks.

And it will do this work with a much catchier name.

"This rover is the first leg of a round-trip mission to Mars that will advance understanding in key science fields like astrobiology," Lori Glaze, director of NASA's Planetary Science Division, said in a statement Monday (Jan. 13). "This contest is a cool way to engage the next generation and encourage careers in all STEM [science, technology, engineering and math] fields. The chosen name will help define this rover's unique personality among our fleet of Martian spacecraft."

NASA selected 4,700 volunteer judges to sort through the deluge of submissions from K-12 students around the country. The newly announced semifinalists proposed a wide variety of names, from the grand (Excelsior) to the playful (Dusty).

NASA's three previous Mars rovers — Spirit, Opportunity and Curiosity — were also named by students. Many of the Mars 2020 semifinalists went down a similar path as those winners, proposing monikers such as Ingenuity, Imagination, Inspiration and Courage.

You can find all 155 semifinalists on the Mars 2020 naming-contest website here.

The next cull will whittle the field down to nine finalists, who will get a nice intellectual reward for making it that far. The nine students "will talk with a panel of experts, including Glaze, NASA astronaut Jessica Watkins, NASA JPL [Jet Propulsion Laboratory] rover driver Nick Wiltsie and Clara Ma, who proposed the name for the Mars Science Laboratory rover, Curiosity, as a sixth-grade student in 2009," NASA officials wrote in the statement.

The public will be able to vote for their favorite of the nine finalist names starting in late January, NASA officials added. This public vote will be one factor considered in the selection of the final name, which will be announced in early March.