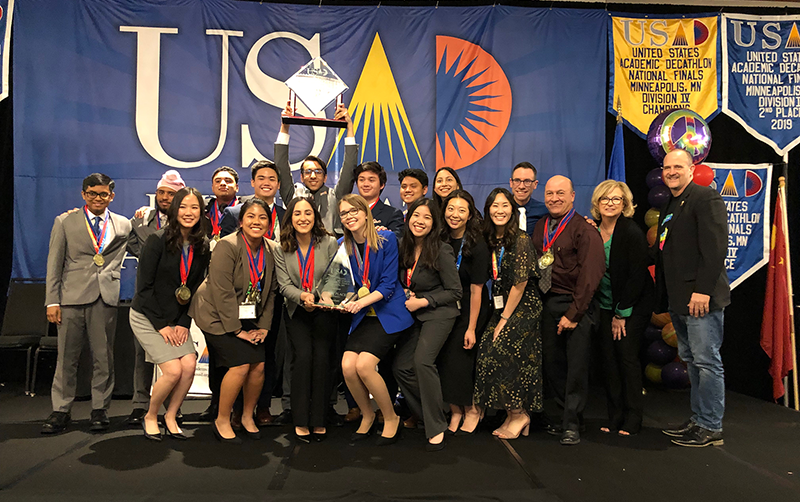 “We’re so excited for our team and thrilled that they competed so hard and with such dedication,” said Julia Howelman, administrative director of instruction, who supervises and supports the team and coaches. “But what is much more important and much more rewarding is seeing these students rally around each other, support each other through the tough times, not just the victories, and mature and grow as inquisitive young people.”

The team won first place in the Super Quiz, the final trivia round at yesterday’s competition. The three students on the varsity team, Tamara Cruz, Benjamin LaFreniere and Ezhan Mirza, won college scholarships for their highest group score. Dilawar Khan, Kenny Ly and Lelija Kazlauskas earned college scholarships for their highest individual scores. Jared Matsubayashi landed the highest combined speech and interview score and received a standing ovation while reciting his speech during the awards ceremony.

The welcome celebration will be held at the school flagpole. GHC is located at 10535 Zelzah Ave., Granada Hills 91344. Parents, media, and members of the community are invited.

“Each year is a tough challenge that forces the decathletes not only to bear down and study hard but also to overcome disappointments and moments when they really are pushed to new limits,” said Alina Lee, head coach. “This year was no different. But one thing that stood out is how a number of our students had personal connections to the topic, through family and other ties. These extra levels of understanding gave this team a different set of reserves that they were able to draw upon and use to encourage each other.”

The Academic Decathlon is a rigorous, 10-event competition that revolves around a central topic in seven subject areas: science, literature, art, music, social science, economics and mathematics. This year’s topic was “The 1960s: A Transformational Decade.” The decathletes compete in multiple-choice exams on each topic as well as through essays and speeches. GHC won both a Los Angeles-area competition for charter schools and the California state championship to qualify for the national competition, which was held in Bloomington, Minn.

GHC’s victory concludes the 2018-19 Academic Decathlon season. The national competition took place from Thursday through Saturday. Next year’s competition topic will be “In Sickness and in Health: An exploration of Illness and Wellness,” with the national title to be decided in Anchorage, Alaska.

“On behalf of the Granada Hills Charter community, I want to congratulate our 2019 National Champions,” added Brian Bauer, Executive Director of GHC. “Their dedication, determination and discipline are wonderful reflections of the education and environment for learning we strive each day to create at Granada Hills Charter. We all are very proud of them and hope the memories they have made are everlasting and inspire them, whether they are returning GHC students or move on to the next exciting stage of their lives.”

###
About Granada Hills Charter School: Granada Hills Charter School, the largest charter school in the nation, is an independent public school in the San Fernando Valley. A fiscally independent conversion charter school, Granada Hills Charter has a current student enrollment of approximately 4,750 in its high school program and 400 students to be enrolled in 2019-20 in its new TK-8 program. Both programs have a combined annual student wait list of nearly 4,000. The School’s student population is one of the most diverse, with more than 40 languages other than English spoken at home and over 60 nationalities represented. Over 50 percent of students are eligible for the National School Breakfast and Lunch Program. As a 501c3 non-profit benefit corporation, the School’s Governing Board is the legal entity overseeing all school policy and its $60 million operating budget. The school is ranked “#1 Best Charter High School in California,” “#4 Most Diverse Public High School in Los Angeles” and “#11 Best Charter High Schools in America” by Niche.com in the 2019 Best Schools rankings.